Today was Melbourne Open House day, and I was excited at the prospect of seeing inside the Russell Place power station. I even fought my hangover and went out of the house by midday with lots of camera gear with that objective in mind.

I arrived at the location, where there was a huuuuge queue, all the way down the alley and then down Burke street. Not a good sign. After a while an official came by to say that people at my point in the queue could be expecting a two hour wait, maybe a bit more.
OK.. so I'll wait. At least I have a couple of friends, also hungover, to talk crap with to fill in the time, and hold places in the queue while we take turns buying snacks, coffee, juice, etc.

Nearly three hours later, we're told that the people who started queueing at 11am are only now at the front of the queue, and there's only an hour and a half left before they close. A gentleman in the queue near me asks the official guy how many people are going through.. it's 20 every 20 minutes, or 60 per hour. He then enquires how many people are in front of us in the queue, and whether there are more than the 90 that they still have time for..
The official has a "oh, that's a good idea" look, and goes off to count. He comes back a while later and announces there are well over a hundred people in front.. so everyone behind number 90 may as well go home now.

Damnit! Couldn't they have worked this out, like, two hours earlier? I stood around in a windy, cold alleyway for half the daylight hours for nothing?? Gnnnrgh. Rather disappointed, all in all!

Retail therapised with a new pair of jeans and a shirt, looked at potential carry-on luggage without success*, and then came home tired and grumpy. Am now making bolognese with veggie mince; last attempt ended up rather dry and meh, but am hoping second attempt works out better. (With addition of a glass of wine into the sauce).

[* My previous carry-on bag has fallen to bits, annoyingly. Black/grey canvas satchel. I suppose I could just repair it.. But it wasn't that hot anyway.] 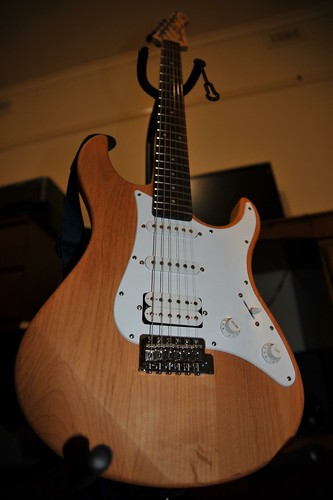 That is my new guitar!

I swear I looked at a few hundred new and second hand guitars, but in the end settled upon this one.. I liked the way it looks, and the way it is balanced/fits on me, and I'm told it's a good quality body too. One massive chunk of solid "Alder" wood. (I like the raw un-lacquered look, rather than the shiny finish most electric guitars seem to have.)

After some experimentation, I think it sounds nicest with the bridge pickup and centre pickup linked.. I am using quite "clean" sounding settings while I'm learning, so no doubt I'll figure out what works well for other sounds in due course.

I've been playing with it and reading online tutorials for a couple of days now, and people weren't kidding when they said my fingers would be sore! However I'm happy that I can now just about pluck out the intros to "Hurt" and "Wish you were here" - slow, but recognisable.

Thanks to Tom, Bekki and Sean for their advice so far. Much appreciated! 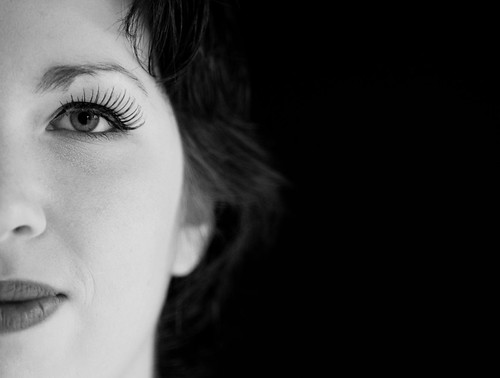 loz_vovin kindly agreed to sit for me while I tried various portrait techniques.
This is my favourite photo from the shoot - and was the first I took. Strange how that works out. 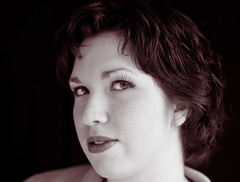 I toured around guitar stores (new and secondhand) in Fitzroy yesterday..
Did some research online, listened to what a few friends had to say last night..
Went back at lunchtime today with one particular guitar in mind..
And it had been sold :(

Damnit. Eh, there'll be others. Plenty of others in fact.
I just hate it when you spend ages debating the merits of one thing over another, eventually pick one.. and then find you have to start again. Hmph.

Ah, wintertime..
It's cold (10 to 12 degrees), and my usual pastimes of outdoor photography and motorbike rides don't fit with that quite so well.. and Melburnians just don't seem to go out to pubs or clubs or anything so much this time of year. Hmph.

I always seem to fall back to some other time-wasting activity for the colder months.
In past years it's been things like CB/amateur radio, EVE Online, Lord of the Rings Online, roleplaying games, FPS games. Last year I dug up my (very) old MIDI keyboard and bought a "teach yourself piano" book.

I didn't get too far with the piano last year, but this year I'm going to give music another try, and so I intend to purchase a cheap guitar, and attempt to learn it. I'd really *like* to be able to play music.

I have decided to go for an electric guitar, since that'll allow me to mess around with the sound more, and I'm a sucker for electronics. Also, I think I can use headphones, and thus not annoy housemates with dreadful practice notes :)
(It's still ages before I get to move into my house.)

Am now looking for online sites with lessons. So far:
* http://guitar.about.com/library/blguitarlessonarchive.htm

I think I've just been rick-rolled by Bill Hicks.
http://dryft.net/tmp/bill_hicks_we_live_in_world.mp3
From beyond the grave! Is there no limit to his power?

Monday was horrible, I didn't so much feel sick as just really out of it for the day, and then plain ill in the evening.
Tuesday was an improvement, I felt extremely sore, achey and hot/cold, but a lot better than Monday, oddly.
Wednesday I went back downhill and ended up with horrible fever and feeling like my body had gone into shock (very cold, losing feeling in fingertips).
Thursday was feeling a bit better again, body was still doing weird things with temperature though.
Friday felt reasonable, but a cough had been building up during the week and continued.
Saturday/Sunday - Still took it easy, but generally feeling well again, apart from this stupid cough.

Ow.
Ow ow ow.
I woke up feeling fine this morning, and rode the motorbike to work in the bright sun, feeling optimistic about the week.
By lunchtime I felt like I'd been run over by a train a few times and then tossed into a freezing river. I don't know if I've caught "that" flu, but whatever it is, it came on extremely rapidly and now I feel like death warmed up.

On the other hand, it has provided me with an excuse to rug up as for a polar expedition, then curl up in a blanket on the couch as well with the central heating on full, and start watching serial experiments lain episodes back-to-back, possibly napping slightly here and then, which worked reasonably well with the surreal nature of the anime.

Have woken self up again now, and got back into bed after pre-calling in sick to work.

I hope this stupid illness disappears as quickly as it came on! I have stuff to do later this week!
I'm disappointed in my immune system.. it was generally really good since mid 2007, but lately I've come down with cold, headache, and now this! Hmph :/

This week I played through Braid, a little indie game.
It was a bit on the short side for USD$15, but it was genuinely interesting and thought-provoking.

At first glance the game is a platformer - run, jump, collect puzzle pieces.. Except that key to the game is the manipulation of time, and playing the game requires you to really get your head around that idea. Levels experiment with different concepts, like localised time rates, loops, phases, and more.

The other key element is the story, which is admitedly only rather loosely interspersed with the gameplay, but is still quite interesting, and manages to convey it's tale, or tales, well. It's not a clear story, but rather something David Lynch would be proud of. It appears clear-cut at first, but as you progress you realise things are not what they seem, and yet make sense, at the same time.
And like a Lynch film, I've spent the past hour searching the internet to read alternate theories on what the story means.

If you like gaming and feel like an interesting new twist on old styles, then give it a go, I think you'll like it. If you hate computer games, or hate obtuse plots, then you should give it a miss.

I'm quite glad that computer gaming seems to have finally evolved to include interesting things like this, rather than yet more things with nothing but bigger technicolour explosions.

I'm going to (try) and start a tech blog, at http://blog.dryft.net/
Idea is that it's more about software development, Perl, and other technical/professional topics.
Hosted on my domain name, it'll also be the one I hope people discover when googling for me, rather than my Livejournal.
Not that there's much /wrong/ with my LJ, but it tends to be my rants about everyday life rather than maintaining any kind of professional attitude, and I intend to keep it that way ;)
Collapse